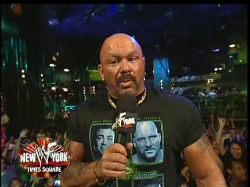 I wasn't gonna do this, but what the heck. It's kinda fun to do.

>Can Roman and Rollins defend their titles against Show and Jericho now that they don't have the numbers advantage?
>Naomichi and Ho Ho were so impressive on SDL that Shane McMahon has decided to give them a Tag Title Number One Contendership match against the Lucha Dragons! Are they gonna be able to make Shane proud? Or will the Lucha Dragons
>Emma is back! And she's getting back the title that WAS STOLEN FROM HER! Her only problem is that to get that title... She's gonna have to beat one of the most dangerous women in the WWE.
>After Apollo's shock victory over Cody Rhodes on Monday Night Raw, Rhodes is gonna take the Intercontinental title back by force!
>Punk sets out to finally get his hands on a World Title for the first time since being cashed in on by The Ultimate Opportunist. Dean is out to capture another title for the Shield. And The Greatest Man that Ever Lived is gonna prove why he's one of the greatest performers of this era.
>Adrian Neville, Antonio Cesaro and John Cena (Team SDL) go up against The Authority (Helmsley, Orton, and Rock.) not only for the Survivor Series bragging rights, But for the United States Championship that Randy Orton practically stole from Adrian Neville.
>Will the Ultimate Opportunist regain his WWE Championship now that Christian and Lita are banned from ringside? WIll Kevin Owens prove that his win last month wasn't a fluke by beating 3 of Smackdown Live's top talent? Will AJ Styles finally regain his title that Orton punted off him a couple months back? Or Will The Underdog from the Underground finally prove that he was the top guy of Inzanely Phenominal?