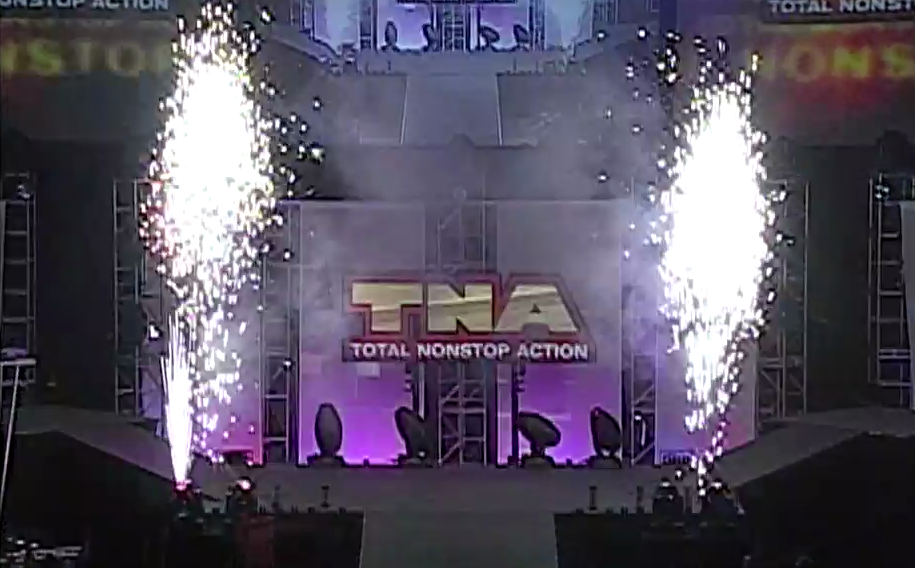 by redreddington on 3rd March, 3:39pm

The first ever person to walk down a ramp on a TNA show: Don West. And from the amount of stuff I know about the first few shows, Don West's attire will be levelling up each week. For show one he's gone for a very safe Hawaiian number. Don's main purpose is to introduce another commentator for the night everyone's favourite Vince Russo lackey: Ed Ferrara.

Ed looks like a leather clad Raven, who throws it over to Mike Tenay who is the only one who decided to follow the dress code. This announce table looks like a bunch of people said "lets go to dinner" and misunderstood the invitation.

We get thrown over to Jeremy Borash to introduce a walking museum of the National Wrestling Alliance. Eventually the entrants are getting pushed out so quickly that Tenay can barely explain the historical importance of these people. Finally out comes Ricky Steamboat bringing the NWA World Heavyweight Championship, the title was stripped from Dan Severn about a month before for failing to compete in a match for it. Or at least that's what Wikipedia says….

Oh wait here comes Jeff Jarrett, he starts off by burying the tournament. Before being interrupted by a very drunk Jackie Fargo who manages to make Jarrett the first entrant in the match. Suddenly Ken Shamrock appears, who also agrees that the match concept sucks and then we get some more music and out from the crowd comes Scott Hall.

Tenay screams about how Hall changed the business back in 1996 and we get our "Hey yo!". Scott also buries the Battle Royal concept. Jeff Jarrett tells everyone to stick it and we're being sent to the back with Goldylocks with Puppet (the original midget killer) who screams that we're going to start the show off with midgets, now I'm not sure if this is unintentional comedy but we're fifteen minutes into the show and we've not even started the wrestling and that midgets could be a way to describe the undersized performers in the opening match.

Don West asks some genuinely ignored questions in this match like "how comes he doesn't get disqualified for that?" a question that will be asked for the rest of the show's history. We get some finishers, almost a ref bump before Jimmy Yang pulls off a big moonsault for the victory.

Just worth noting that all through this match the commentators are putting over that three of the men in this match will next week be fighting for the right to be off the first ever X Division champion of the company. Which three men? Well of course the three men that lost the match.

Hollywood is from Memphis and apparently his name isn't about geography it's about style, all this told to us by Mike Tenay as they botch a tilt-a-whirl. TEO meanwhile stands for "Total - E Outstanding". This match coming off the previous match isn't great as both guys screw up a couple of times in the match. TEO eventually wins with the worst Swanton Bomb ever.

Next up Don and Ed are in the ring to big up something happening next week: The Lingerie Battle Royal, the prize is to be named Miss TNA. All the girls come out, not necessarily in the right order they are announced. Eventually Francine gets on the mic and eventually gets into a roll around brawl with Electra. Don West makes the save with Ed's jacket as Electra's top comes off.

We go to the back where Goldilocks is waiting with Mortimer Plumtree, who has apparently been the source of internet controversy. I have no idea what Plumtree's character is supposed to be. I'm assuming the fact that he carries a cricket bat, wears glasses and comes from a high class background that he's supposed to be a Jim Cornette parody. The controversy probably arises from the tag team that he's managing: Richard and Rod, The Johnsons.

Cowboy James Storm and Psicosis vs. The Johnsons (Richard and Rod)

The stupidity of this match is that both of the Johnsons are dressed exactly the same so the commentators can't tell them apart which they bring up as a great strategy to use against their opponents. Keep in mind that the guys playing the Johnsons are actually twins. Suddenly Alicia appears outside of the ring, why so she can get money off of the referee. Non wrestlers involved in storylines? Check. Eventually this match ends with the some minimal interference from Plumtree leading to Storm getting pinned with a TKO.

I'll say one thing at least this match gives Ed Ferrara an opportunity to get out all the dick jokes he has.

And it's to the back with Goldilocks as we get to meet the Dupps, the generic redneck tag team and their valet who is their sister, cousin and girlfriend. The two decide to grab a beer from a ice barrel but Bill Berehns comes in and says "there's no beer drinking in locker room, NWA doesn't want any intoxicated wrestlers here." I can only imagine this is burying someone but the only person I can think of is Scott Hall and he's in the company.

It's almost the top of the hour so we better get some non-wrestling out here: Hermie Sadler and Sterling Marlin. As a Brit I'm not going to attempt to understand NASCAR but these fans apparently love it. So Borash starts interviewing them about "not wrestling" before out comes K-Krush who is fed up hearing about racecar drivers. Just before you think that K-Krush is out here to support wrestling he refers to "his kind" and "your kind" because it's the South so the black guy is the heel. K-Krush gets into an altercation with Hermie Sadler before none other than Brian Lawler makes the save. Brian books himself in a match against K-Krush for next week.

We cut back stage and Jarrett is assaulting Jackie Fargo… and then we're straight back to ring for more tag team action. Christian York and Joey Matthews against the aforementioned Dupps: Stan and Bo accompanied by Fluff. I'm not sure if they assumed that these guys would somehow be the faces but they aren't. After some interference from Fluff the heels get the win making it so far 3 - 1 to the heels on the show.

Top of the hour and we're honoured with a Toby Keith music video. Keith is more over with the crowd than half of the wrestlers on the show so far. Keith sings the song "The Angry American" which is mainly about 9/11 you know when we all thought that the War on Terrorism was going to be a success, when Afghanistan and Iraq seemed like a good idea at the time.

Suddenly out of nowhere, Jeff Jarrett shoves Toby Keith in what is the most heelish move ever in the history of pro wrestling.

So the gauntlet for the gold just begins before Borash can even explain the rules and down comes entrant number #2: Buff Bagwell. He manages to hit the Blockbuster and then gets backdropped out by Jarrett.

Entrant #3 is Lash Leroux, so if you're playing the WCW shot game then that's two. Jarrett beats the crap out of Lash and eliminates him within 40 seconds of the ninety second time limit.

Entrant #4 is Norman Smiley, who wiggles before being low blowed and eliminated by Jarrett.

Entrant #5 is Apollo who is Puetro Rico's answer to Batista in terms of look and mannerisms. Apollo is the first guy to even get close to eliminating Jarrett and the first "not from WCW" guy in this match.

Entrant #6 is K-Kwik who saves Jarrett from being press slammed out of the ring as both him and Jarrett start going to work on Apollo.

Entrant #7 is Slash being led to the ring by James Mitchell. Apparently there's a faction called the New Church. Shame that was never brought up in any prior promos for this match. So now we have three heels against one face.

Entrant #8 is Del Rios aka Discount Scott Steiner. He's doing release suplexes and big clubs to the back. He's even got the Superman logo on his trunks,.

Entrant #9 is Justice who we'll later see as Abyss, but for now we'll just watch him get gassed and kicked in the dick.

Entrant #10 is Konnan who dishes out three rolling thunder clotheslines whilst wearing the lowest trousers ever in the history of the sport. So far we've seen no elimination since Norman Smiley.

Entrant #11 is a really slimmed down Joel Gertner introduces the Rainbow Express and their competing member: Bruce who's replacing Lodi. If you're still on WCW shot taking then you'll remember Bruce as Pee Wee, or maybe you won't.

Entrant #12 is Rick Steiner who actually gets a reaction from the crowd. Steiner eliminates Slash, drops Justice and eliminates him before turning his attention to Jarrett.

Entrant #13 is Malice, formerly the Wall, who gets no reaction and then just starts chokeslamming everyone. Eliminating Bruce, K-Krush, Del Rios, Konnan and Rick Steiner. And suddenly we're down to three: Malice, Jarrett and Apollo.

Entrant #14 is Scott Hall. The hilarious part about this is that just before Scott comes out Apollo dodges a double elimination and climbs to the top rope whilst the two heels turn their backs. Rather than hit a move he just sits there and eventually jumps down and then hits a punch. Hall hits the Razor's Edge on Jarrett but doesn't eliminate him because Toby Keith needs to come in and suplex Jarrett.

Entrant #15 is Chris Harris who is then ambushed by entrant #16 "The Vampire Warrior" otherwise known as Gangrel, by the way it's not just me including these names it's the commentators as well. This interference and rivalry is not explained.

Entrant #17 is Devon Storm, formerly Crowbar… nothing much happens here.

Entrant #18 is Steve Corino who immediately interrupts the elimination of Chris Harris. Tenay suddenly goes into "Japanese wrestling" mode naming various people that I guarantee the audience has never heard of.

Entrant #19 is Ken Shamrock who just starts kicking everyone before being taken down by Malice.

Hall and Apollo attempt to double team Malice who eliminates both leaving it just down to pinfall or submission between Shamrock and Malice with Steamboat as the referee.

So it's former WWE superstar and mixed martial artist versus WCW gimmick burdened pro wrestler. I know who my money is on. Malice goes for the chokeslam but Shamrock reverses into an armbar. Malice stays in the hold for about a minute and half before he grabs the rope. A few minutes later Malice finds himself in an ankle lock, Malice grabs the rope but Shamrock pulls him off and Steamboat calls for no break.

Steamboat gives Shamrock a five count but refuses to break the hold, this apparently gets a huge babyface reaction. Shamrock breaks out of a chokeslam and hits a belly to belly and pins Malice. For those keeping score: Shamrock entered second from last eliminated one person and beat the dastardly heel who entered in at #13, eliminated a quarter of the competitors and never tapped out to any of Ken's submissions.

Ken Shamrock's celebration consists of pyro and a handshake before we cut to the announce table so that Ed Ferrara can make a joke about the Special Olympics. It's then straight to the back for more Jeff Jarrett who's been protected from Toby Keith and Jackie Fargo.

Never mind that we have a new World Champion we have to have more of Jeff Jarrett complaining. He punks out Bob Armstrong before the show just panics and announces Jeff Jarrett and Scott Hall for next week and then goes off the air.